Home Evidence in the Aleppo Codex

Evidence in the Aleppo Codex

In The Aleppo Codex

Short History of the Aleppo Codex

The Aleppo Codex was written in about 930 in Tiberias and was originally a full manuscript of the entire Bible. This manuscript was preserved for a thousand years and at some point was relocated to the city of Aleppo in Syria. After the UN Resolution establishing the State of Israel in 1947 it was damaged in riots that broke out in Syria. At first thought to have been completely destroyed, later most of it was discovered in a washing machine – it’s secret hiding place. In 1958, the partial Aleppo Codex was smuggled out of Syria to Jerusalem and delivered to  Izhak Ben-Zvi, the then President of the State of Israel.  Only the last eleven pages of the Torah, the final chapters of the Book of Deuteronomy, survived the 1947 riots.  Also the final pages of the Song of Songs, and all of Ecclesiastes, Lamentations, Esther, Daniel, Ezra, and Nehemiah were lost. Of its original 487 pages, only 294 double-sided pages of the Aleppo Codex have been recovered to this day. Endorsed by Maimonides, the Aleppo codex was considered the authoritative text by which other Torah scrolls and codices were checked. There is evidence that the 1008 CE Leningrad Codex, the oldest complete manuscript of the Hebrew Bible, was corrected according to the Aleppo codex. The Aleppo Codex has been scanned and is available for all to view at http://www.aleppocodex.org/aleppocodex.html – the following images were taken from the online copy of these scans.

It is important to note that the Masoretes vowel and cantillation markings were employed to PRESERVE the existing tradition of how the Bible was read or cantored in the synagogue. The Masoretes did not create a new tradition, they recorded the oral tradition of pronunciation of every Hebrew word in the Bible which had been passed down generation to generation. 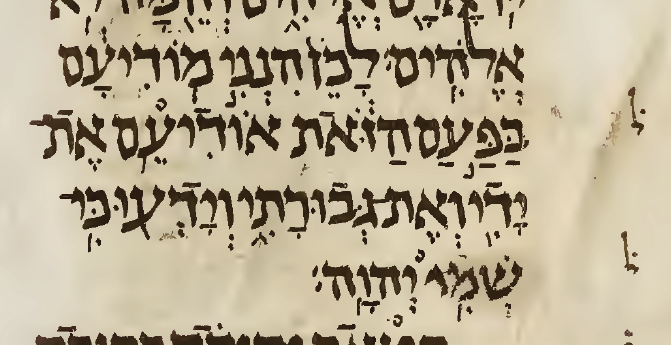 The image above of Jeremiah 16:21 represents the typical vowel markings for יהוה in the Aleppo codex – a sheva, no middle vowel marking, and a kamats – leaving the pronunciation Ye – h? – vah. So this should immediately dispel the pervasive myth that the vowels of Adonai (hataf patach – cholam – kamats) were added to יהוה – they simply were not – let’s put that myth to bed forever.

Over 99% of the time the Name appears, the middle vowel marker is missing, but a handful of times it was left in. So let’s look to see what the Aleppo records that middle vowel to be. 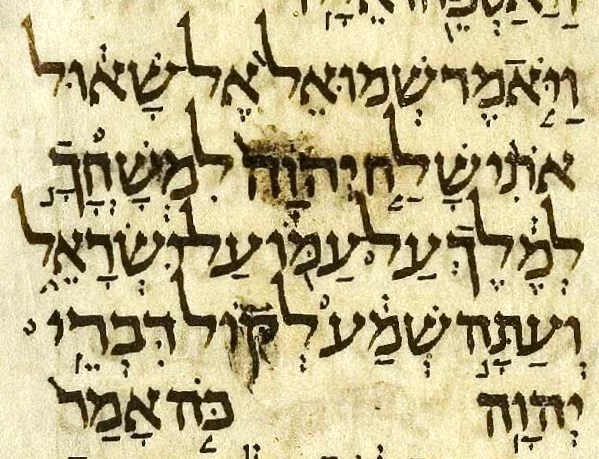 Samuel said to Saul, “I am the one יְהֹוָה (Yehovah) sent to anoint you king over His people Israel. Therefore, listen to Yehovah’s command!” 1 Samuel 15:1

Aleppo Codex, Folio77b, 1 Kings 8:11 …so that, because of the cloud, the cohanim could not stand up to perform their service; for the glory of Yehovah filled the house of Yeh-vah. 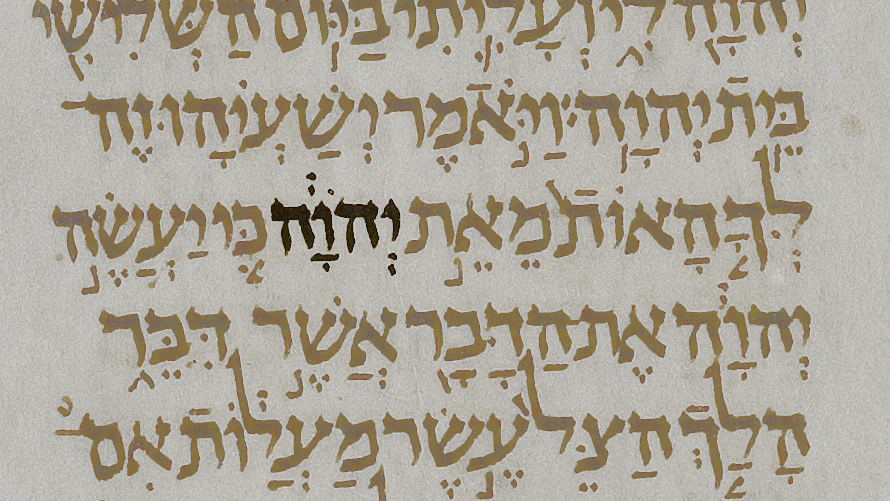 Aleppo Codex, Folio 101b, 2 Kings 20:9 “Yesha‘yahu said, “Here is the sign for you from Yehovah that Yeh-vah will do what he said: do you want the shadow [of the sundial] to go forward ten intervals or backward ten intervals?” 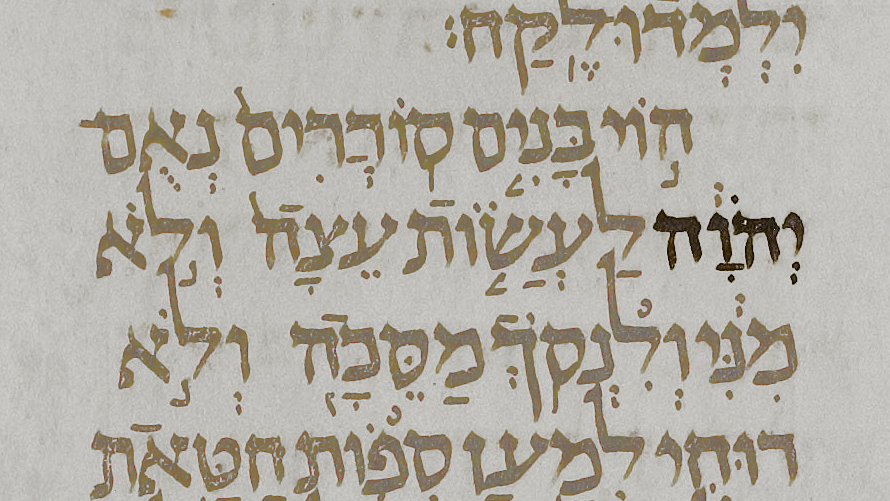 Aleppo Codex, Folio 115a, Isaiah 30:1 “Woe to the rebellious children,” says Yehovah. “They make plans, but the plans are not mine; they develop alliances, but not from my Spirit, in order to pile sin upon sin.” 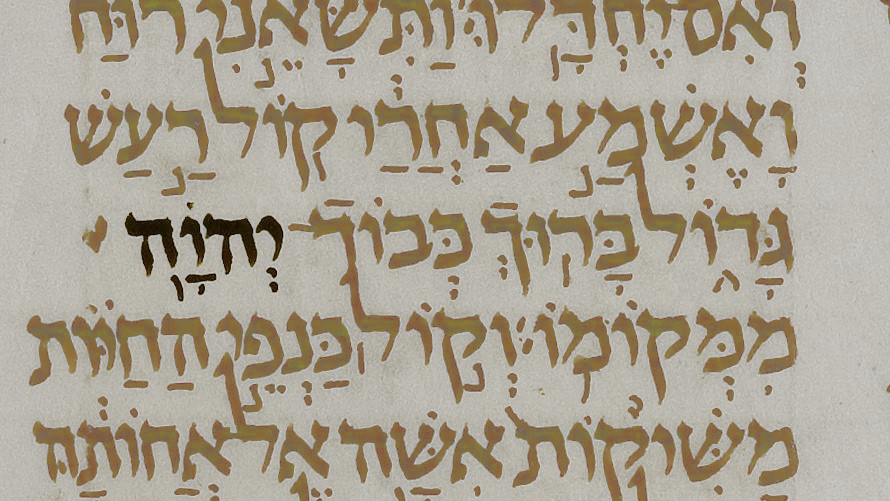 Aleppo Codex, Folio 163b, Ezekiel 3:12 “A spirit lifted me up, and I heard behind me a very loud sound — blessed be the glory of Yehovah from his place!” 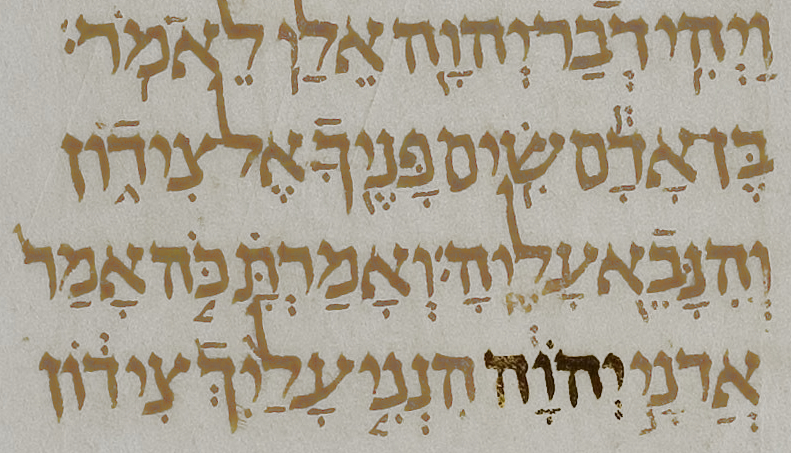 Aleppo Codex, Folio 177b, Ezekiel 28:22 “Say that Adonai Yeh-vah says: ‘I am against you, Tzidon; but I will be glorified in you. They will know that I am Yehovah, once I execute judgments in her and show my holiness in her.”

Aleppo Codex, Folio 244a, Psalms 26:12 “My feet are planted on level ground; in the assemblies I will bless Yehovah.”

Shattering the Conspiracy of Silence: The Hebrew Power of the Priestly Blessing Unleashed

A Prayer to Our Father

The Naming of Jesus in Hebrew Matthew

Proclaim His Holy Name: Uncovering Yehovah’s Will for His Name