YEHOVAH Alone is The Creator

For students of the Tanakh, the identity of the Creator is not a mystery. Yehovah alone is the Creator.

However, for students of the New Testament, one single passage has been used by some to overturn thousands of years of understanding and replace it with a new one – that Yeshua, the Son of the Creator, is actually the Creator.

15 He is the image of the invisible God, the firstborn of all creation; 16 for in him all things in heaven and on earth were created, things visible and invisible, whether thrones or dominions or rulers or powers—all things have been created through him and for him. 17 He himself is before all things, and in him all things hold together. 18 He is the head of the body, the church; he is the beginning, the firstborn from the dead, so that he might come to have first place in everything. 19 For in him all the fullness of God was pleased to dwell, 20 and through him God was pleased to reconcile to himself all things, whether on earth or in heaven, by making peace through the blood of his cross.

Notice that it does not say that Yeshua actually created anything.

Paul was an expert student of the Torah – you could say he had a PhD in all things Tanakh. So Paul would know all of the verses which declare that Yehovah alone is the Creator, that Yehovah is one, that Yehovah shares His glory with no one. He would also be aware of all the verses in the Tanakh which speak of the Messiah being Yehovah’s agent on earth, doing Yehovah’s will in the full authority of Yehovah, but not actually being Yehovah. This is Paul’s framework of understanding – the Tanakh’s view of Yehovah and of the Messiah.

15 He is the image of the invisible God, the firstborn of all creation… We must keep in mind that all mankind is also supposed to be the image of God – we are made in His image. However most of us fall short of that goal. Yeshua however, succeeded in fulfilling this goal. He demonstrated through his actions that he is the manifestation of God’s will on earth. Being the image of God means doing what God would do. It’s not about appearance or about substance, it is about action. The Hebraic way of understanding someone is knowing what they have done and will do. It’s not “I think therefore I am”, it’s “I am what I do”. Secondly, in the passage we see that Yeshua is the firstborn of all creation. This is often misunderstood to refer to his first birth, but we know his first birth was as a baby in Beit Lechem and millions were born before him, so he can’t be the firstborn in that sense. Verse 18 tells us what this firstborn status is referring to –  “the firstborn from the dead”. Yeshua is the first to receive the promise of eternal life, the incorruptible new body we will all receive when we are “born again”.

16 FOR IN him all things in heaven and on earth were created, things visible and invisible, whether thrones or dominions or rulers or powers—all things have been created THROUGH him and FOR him… This is speaking of the whole plan of creation – from beginning to end. From the beginning Yehovah knew what would happen. Adam and Eve receiving the knowledge of good and evil, being expelled from the garden and losing access to the Tree of Life was not a surprise. From the beginning Yehovah had a plan to reconcile humans back to Himself, restore creation and grant eternal life. This is why Revelation 13:8 says that Yeshua was slain from the foundation of the world. Now we don’t imagine that Yeshua was killed twice, do we? No, we understand the the plan for his death was from the beginning. That’s why Paul can argue that all things came into existence so that this plan could take place.

17 He himself is before all things, and in him all things hold together… This is a direct reference to what Paul argues in 1 Corinthians 15:23-28, but in order to see this, we need to understand the use of the word συνεστηκεν in this verse. It is usually translated as “consist” or “hold together” but that misses the point.  συνεστηκεν has the meaning of putting things together properly – to order things as they should be. This is role of the Messiah who was granted all authority by Yehovah. Yeshua is before all things because Yehovah has put him above all things to do His will – to rightly order all things according to the will of Yehovah.

18 He is the head of the body, the church; he is the beginning, the firstborn from the dead, so that he might come to have first place in everything… This is expounding on the prior statement. To show that Yehovah has Yeshua leading the way, as a King should lead the way for his people. Since all authority has been granted to Yeshua by Yehovah, it is fitting that Yeshua would be first in everything.

19 For in him all the fullness of God was pleased to dwell… It doesn’t say “for in him God was pleased to dwell” which is how many take this passage. God, the Creator, can not be contained by His own creation. Further, the verse actually doesn’t say “God” at all – Paul literally says “because in him it did please all the fullness to tabernacle”. How can we understand this fullness? The passage seems to be pointing back to Yeshua being the image of God – he demonstrates the fullness of what God would want in His image bearer.

20 and through him God was pleased to reconcile to himself all things, whether on earth or in heaven, by making peace through the blood of his cross… Here we have the culmination, the point of the passage – how all of this fits in the plan that has existed since the beginning. In Isaiah 53 we know that Yeshua would be tested to see if he would present himself as compensation for the offense of the people. If he did, many would be made righteous because he was willing to suffer the cost of the New Covenant. And after his death, he would become the firstfruits of many – the first to be born again of all creation. 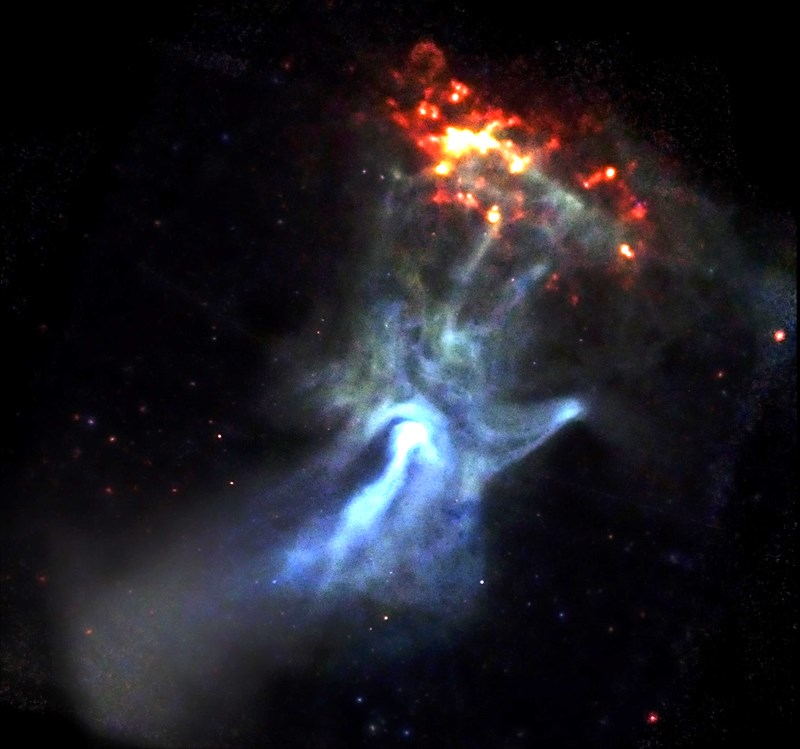 The Hand of God Nebula – PSR B1509-58 is a pulsar that rapidly spins seven times per second, firing out a particle wind into the material around it forming this unique shape.