Home Blog Busting the Myth of the Adonai Vowels

Busting the Myth of the Adonai Vowels

Everyone knows that the Masoretes inserted the vowels of Adonai into יהוה and that’s where Yehovah came from, right?

The fact of the matter is that the Masoretes did not insert the vowels of Adonai into  יהוה – this is easily shown by visiting the Aleppo Codex online and looking for yourself. 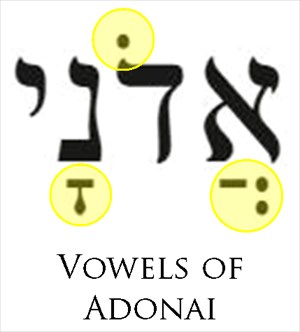 On the left are the vowels of Adonai – it has three vowels, chataf patach, cholam & kamatz.

Typically, as you will see if you go online and look at the Aleppo Codex for yourself, there are only two vowels given for יהוה and only one of those is the same as the vowels of Adonai – the kamatz.

Two is not the same as three.

One out of three is not the same at all.

If the vowels of Adonai were inserted into יהוה there would be 3 vowels all of the time and they would always be chataf patach, cholam & kamatz.

But all scholars agree that the Masoretes inserted the vowels of Adonai into יהוה, right? Again, wrong!

Rabbi Jacob Bachrach says in his book Ishtadalut Im Shadal: “There is not a single vowel here that comes from, or remains from, a reference to the title Adonai…”

So, one must wonder if the scholars making this claim had access to the Aleppo Codex to verify this theory for themselves (unlikely) or where they just repeating something (far more likely) they had heard?

So where does this myth come from?

We can only speculate where myths begin but it may be due to the confusion between how יהוה is written and how it is read. The tradition to read יהוה as Adonai pre-dates the Aleppo codex by centuries. By the time the Masoretes were painstakingly preserving every jot, tittle, pronunciation and cantillation of the Tanakh, it was already instinctual to say Adonai when reading יהוה.

Pesachim 50a:19 (c.450 – c.550 CE) records “God’s name is not pronounced in the same way as it is written.” This means that with or without vowel markings, those who followed the ban on speaking יהוה publicly would say Adonai when they saw the Name written in the text.

No change of vowels was necessary to create, or enforce, a ban that was well entrenched by 900 CE.

So why then did the Masoretes, 99.99% of the time, leave out the middle vowel? Again we can only speculate. There are no written records by the Masoretes explaining their vowel system when it comes to  the nikkud of the Name. What we do know is that Hebrew grammar requires the unmarked ה (Heh) to have a vowel. Perhaps by leaving the vowel out they were simply reminding the reader to not read the Name outloud?

Read more about the Masoretes’ work at Are the Vowels of Adonai found in יהוה?

So what is that middle vowel? The clue is hiding in plain site – read more about it at Hebrew Theophoric Names and The Name of God.